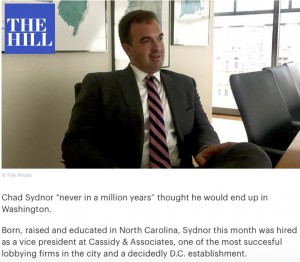 Sydnor this month was hired as a vice president at Cassidy & Associates, one of the most succesful lobbying firms in the city and a decidedly D.C. establishment.

The company counts among its clients defense and technology powerhouses Palantir, BAE Systems, Airbus and Cerner. The last was just named the creator of the Department of Veterans Affairs’ new electronic health records system, a multibillion-dollar undertaking.

His experience is sure to be helpful in his new lobbying role amid a particularly decisive time on Capitol Hill. Congressional defense hawks are pushing back at a young administration, saying its proposed budget falls woefully short on military and homeland security spending.

He says he has his eye on the top lines for defense spending in the fiscal 2018 National Defense Authorization Act.

“I’m very interested to see — we’ve had two bipartisan budget agreements — what does that look like? Is that going to be in the realm of the politically possible?”