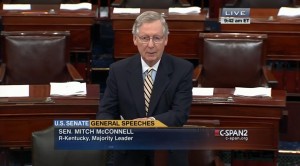 U.S. Senate Majority Leader Mitch McConnell took to the floor of the senate just before adjourning for the August congressional recess this week to give special recognition to Russ Thomasson and his exceptional work as Chief of Staff to Senate Majority Whip John Cornyn. Sen. McConnell said Russ proved to be “incredibly effective” and “an invaluable member of our team” in his leadership role in the Republican Whip Office for the past three years and “is someone whose judgment (he) value(s) greatly.”

Russ joins Cassidy as an Executive Vice President on Monday after his 15-year tenure on Capitol Hill. POLITICO reported on Russ’s move and noted Sen. McConnell also said in his floor remarks, “When (Russ) takes the pulse of the Senate, it’s with uncommon precision.”

You can watch the extraordinary remarks from the Senate floor on C-SPAN by Sen. McConnell here >>> and Sen. Cornyn here >>>