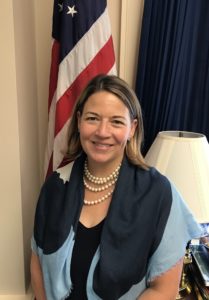 Julie Eddy Rokala, chief of staff to Congresswoman Doris Matsui (CA-6), joins Cassidy & Associates today as Senior Vice President. Julie has led Congresswoman Matsui’s office in Washington and district office in Sacramento, CA since 2007 and has more than 20 years of experience in government, politics and the private sector.

“Julie is one of the hardest working, well-liked and most effective people on Capitol Hill,” Cassidy CEO Kai Anderson said. “Through her work in the California Congressional Delegation for the past decade, she has distinguished herself as a leading presence on a diverse suite of issues from energy to tech to healthcare. She is a top-notch addition to our team.”

Julie is widely respected by her colleagues and members of the California Congressional Delegation for getting things done at all levels of government. She has been responsible for a substantial portfolio of work for Congresswoman Matsui, who serves as a senior member of the House Energy and Commerce Committee. Matsui serves on the Health, Communications & Technology, Environment, and Digital Commerce & Consumer Protection subcommittees.

Julie has also gained key insight on how government can encourage clean energy and 21stCentury manufacturing through Congresswoman Matsui’s work as co-chair of the Sustainable Energy and Environment Coalition (SEEC).

Kai noted that Julie has demonstrated a first-hand understanding and impressive legislative skill in the priority issues of the California delegation that include renewable energy, smart grid, cyber security and autonomous vehicles.

She began her career in the Clinton Administration, working for Secretary Dan Glickman at the Department of Agriculture and then as special assistant to President Clinton at The White House. Following the Administration, she helped Terry McAuliffe navigate his successful run for Democratic National Committee Chairman and later served as his chief of staff.  Prior to becoming Congresswoman Matsui’s chief of staff, Julie was senior director for government affairs at the Mortgage Bankers Association.

Julie said she’s excited to join Cassidy, “With a stellar team, impressive work and uniquely positioned for growth, this is the time to be at Cassidy.”

Kai added, “Cassidy is investing in the best political and policy advocates In Washington, DC with a focus on professionals who have substantive expertise, leadership ability, geographic and political reach, and deep experience.  Julie is a best in draft selection who will benefit existing and future clients.”

Cassidy completed a management buyout from The Interpublic Group (IPG) in 2017.