A Republican majority brings major changes to committee leadership in the U.S. Senate, the size of the majority determines committee ratios and budgets; more seats in the Se 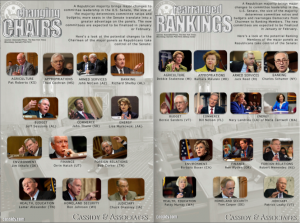 nate translate into a greater advantage on the panels.

The new committees are expected to be finalized in January or February.

In the meantime, Cassidy & Associates just released two infographics that a look at the potential changes to the Chairmen and rearranging of the Ranking Members of the major panels as Republicans take control of the Senate.