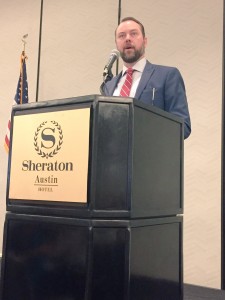 Change in Washington is the hot topic at this year’s event and Charles is sharing his insight on expectations for the water resources sector as well as the challenges and potential solutions.

Charles was a lead Senate Republican staff author on the last two modern water resources bills — WRRDA 2014 and the WIIN Act. In his twelve years of Congressional experience, Charles helped solve water resource issues throughout the nation – from water supply to flood protection to navigation and many other issues.

Charles noted in his remarks, “It’s pretty evident that regulatory and environmental reform is high on this administration’s infrastructure agenda, given the recent executive orders creating regulatory reform task forces at agencies and instructing the Corps and EPA to reevaluate the WOTUS rule, as well as repealing the Stream Protection Rule.”